Although OxClean’s main activities are focused on Oxford, we support other anti-litter campaigns too. One of these is the Great British Beach Clean organised every year by the Marine Conservation Society (MCS) who are a UK charity dedicated to protecting our seas, shores and wildlife. MCS campaigns for clean seas and beaches, sustainable fisheries, and protection of marine life. 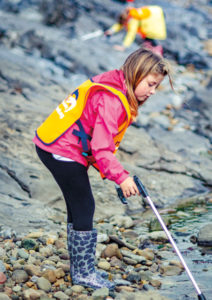 The charity says this year’s Great British Beach Clean was the biggest mass participation beach clean and survey event the UK has ever witnessed. The event, held over four days in September, involved just short of 15,000 volunteers – double the number in 2017. Together the volunteers cleaned 494 beaches and removed 8550kg of litter. The biggest turnouts were 306 volunteers at Pegwell Bay, Kent; 270 at Severn Beach, Gloucestershire; 155 at Swansea Bay and 146 at Ayr, South Ayrshire.

Although the volunteer number and events rose, the amount of litter collected actually dropped. Lizzie Prior, MCS Beach and River Clean-up Project Officer, says “It’s almost certainly a false dawn. UK governments must certainly not think the crisis is over and slow down or shelve any much-needed litter legislation. The Great British Beach Clean is just a snapshot of the UK litter story; there’s more litter in our seas than there has ever been.”

The charity says that following the iconic BBC “Blue Planet II” series, the “Drowning in Plastic” documentary and Sky’s Ocean Rescue campaign, we now know the damage our throwaway culture has done to our seas. We urgently need to reduce the amount of plastic we produce.